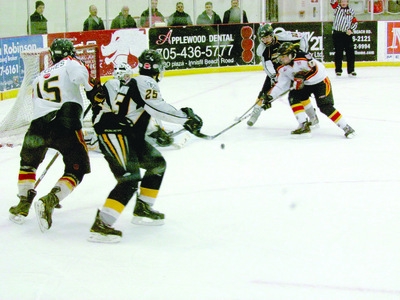 BARRIE – After recently cracking the OHL Cup Top Ten standings and coming in with a 13 game unbeaten streak, the Minor Midget Barrie Colts should have easily grabbed two points from the North Central Predators last Saturday. Should have, but didn’t.
The team tied 2-2.
Playing the role of the home team at the Innisfil Recreation Complex, the Colts had won their last five games and were locked in a three way tie for first overall in the league. Defeating a Predators squad that had lost three of their last four and were struggling to get into the upcoming playoffs, seemed like a matter of just showing up.
Coach Steve Farquharson was the first to admit that his team failed to do just that.
“We’re facing a team here tonight that is at least 20 points behind us and we don’t even show up, that’s unacceptable,” Farquharson said. “What this game did show is that a team may not be on our skill level, at least on paper, but they worked hard and obviously practiced hard, and came away with a point instead of none.”
The last time these two teams faced each other also saw the result of a tie game. After handily putting away several squads that are within a couple of points of his Colts, the frustrated coach thinks he knows why the close games with lesser teams are happening.
“Our guys seem to think that they can let off the gas when a team from the lower part of the standings is on the other side of the ice,” said Farquharson. “The problem is the lack of a point that we should have got tonight could mean the difference between first and third in the playoff seeding.”
A physical game from the opening face-off, the two teams shared heavy checks throughout the first period but saw little in the way of penalties.
With eight minutes left in the opening frame, the Colts took the lead on a goal by Brayden Laurin with assists by Dakota Hynes and Ryan Young. Superb stick-handling by Young and a great finish by Laurin gave the crowd the feeling like the Colts had woken up and were going to start the second period refreshed and ready to go.
Goalie Ian Adriano had made some brilliant saves throughout the first and most of the second periods. But traffic in front of him with five minutes left in the second helped North Central’s Marty Lawlor sneak one past the netminder.
“He kept us in this game and without Ian we may not have gotten out of here with a tie,” said Farquharson. “Our goalies are the only ones that show up day in and day out which is unfortunate because we give them a result like this.”
The second period had a few more penalties and noticeably more aggression. A couple of roughing penalties to both teams had started some bad blood that promised to carry on into the third.
Max Healy scored an early go-ahead goal for the Colts with helpers from Nick Chaykowsky and James Mense-Dietrich.
Proving that no lead is safe no matter how much time is left, the Predators pulled their goalie and Darren Nesbitt scored with 46 seconds left to tie the game and leave a dejected Colts netminder thinking about the last goal.
“I wish I could have that one back,” said Adriano. “It’s not the result we wanted but maybe this will show us that any team can win on any night. We have to be ready to play all the time.”
Those sentiments were shared by defenseman Chaykowsky who believes they’ll be ready for their next game.
“We have to practice harder because that carries over into the game,” he said. “We didn’t play that awful, but when a team is as hard working as North Central was tonight, we have to be ready.”
The Colts host the Clarington Toros on Jan. 29 at the Holly Community Centre at 7 p.m.

There are no comments for this announcement.